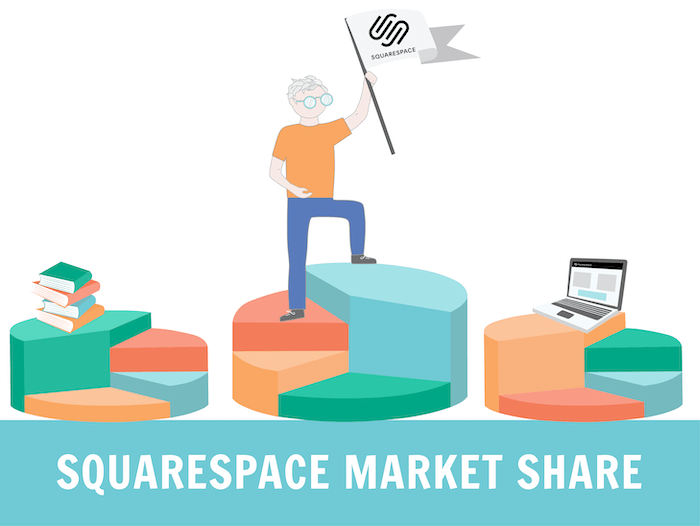 I was watching this interview with Squarespace CEO Anthony Casalena the other day, and he mentions a few interesting things. The company has been around for 16 years, and the Internet landscape has changed a lot during that time.

So they have to adapt and evolve constantly. It’s certainly something we’ve witnessed by reviewing various updates of Squarespace over the years, and what makes them an exciting company to watch.

And yes, the Superbowl ads with Keanu Reeves and Winona Ryder also add to that excitement.

But it did leave me wondering: how well is Squarespace doing in the website builder world? How popular are they? And how can they afford to spend millions in marketing?

So here are my findings about Squarespace’s market share.

There are More than 2M Live Squarespace Websites

The statistics below, which come courtesy of BuildtWith.com, show that Squarespace is still playing catch up with Wix in terms of actual websites in use.

Their biggest competitor also has a larger slice of the website builder market, but it’s important to note that Wix offers free websites, while Squarespace doesn’t. I’m certain this explains the huge difference in websites used.

Here’s how it looks in actual pie chart form, and with added competitors. So the first takeaway is that Wix is by far their biggest direct competitor. Shopify also has impressive numbers, but they specialize in ecommerce only. Meanwhile, Weebly, the third-biggest website builder is quite far behind in terms of popularity.

They Are the Most Popular Website Builder in Important Markets

While Squarespace isn’t globally the most popular website builder, it’s important to note that they are in a number of locations:

By comparison, they are:

So you get the idea: the English speaking world loves Squarespace. I’m not sure if they are planning to target all these other markets, but this is what could probably make them top the list globally.

Their Market Share Could Be Growing Faster Than Wix’s

I should point out that the numbers here could be misleading, as the statistics vary depending on the dataset. For instance, if you add websites built with unknown solutions, the percentages drop drastically.

Still, this helps us see how popular they are compared with, says, WordPress, but also Joomla and Drupal, which I did not include as they are more geared towards enterprise websites.

WordPress, which powers  41.0% of all websites in the world obviously takes the cake here, but it’s interesting to see that Shopify is growing at a rapid pace.

Which brings us to the next point about ecommerce.

Their Online Stores Are More Used than Other Website Builders’

Another area where Squarespace surprisingly beats Wix: the popularity of their Add to Cart feature, which de facto turns your site into an online store.

So interestingly, it’s the first website builder to crack the top 10 most used solutions. All the other popular tools above it are designed specifically for ecommerce. But it’s also surprising to see that they beat Wix here, seeing as Wix is more popular, and both let you build a store with their respective Business plans within the $18 – $25 a month price range.

Squarespace is a Multibillion-Dollar Company

They went public on the New York Stock Exchange in May 2021 with an initial valuation of $7.4B. That’s impressive as Squarespace was initially a bootstrapped company with the first external funding round in 2010. The number, while impressive, pales in comparison with Wix’s market cap of currently $13B or Shopify’s $145B (!).

They Are Consolidating Their brand Through Acquisitions

Another sign that Squarespace is moving fast: their acquisitions of third-party solutions. In 2019, they bought two:

Once again, as a private company, none of the financials were made public. But the acquisitions were clearly explained by the CEO as “part of our pursuit to be the all-in-one platform for anyone who wants to stand out”.

And Yet, People Don’t Search For Them All That Much

You should take this last point with a pinch of salt, as it’s based on Ahrefs statistics for monthly searches. But it’s interesting to see that people type Squarespace into search engines a lot less than Wix, or even Shopify.

But who knows, maybe it’s because their marketing is so effective that people go directly to Squarespace.com?!

An Exciting Future for Squarespace

So it looks to me like the next few years will be a decisive turning point for Squarespace. There are a lot of questions left to answer, such as:

It will certainly be fascinating to update the statistics of this post in a few years.

In the meantime, don’t forget to check our posts about the market share of Shopify and Wix!

You feel all this is quite new to you and want to learn a little bit more first? In our free ebook, “Website Creation for Absolute Beginners,” we’ll show you the steps you need to take to create your own professional-looking website.