In the US, Shopify’s market share is currently the largest of all the ecommerce platforms, with nearly a third of ecommerce websites using Shopify to power their businesses.

We’ve previously looked at how popular Shopify is in the ecommerce world, but we wanted to get a more general view of the Canadian company’s market share.

What we found were interesting numbers that help see where Shopify is at, how big it really is, and where it’s headed in the future.

Shopify has a market share of 25% percent among all US websites that are using ecommerce technologies (according to BuiltWith). This makes Shopify the biggest ecommerce platform in the United States.

Looking at the worldwide market share among ecommerce websites, Shopify’s market share sits at 19%. On a global scale, WooCommerce is the market leader with 24% market share.

Website builders based on content management systems (CMS), such as WordPress and Joomla, have historically been much more popular than Shopify. However, while WordPress usage has continued to climb, Joomla’s usage has waned as Shopify’s has increased. And in 2021 Shopify usage surpassed Joomla for the first time.

This is what the historical data for CMS usage looks like, as gathered by W3Techs, as of January 1 each year:

What’s more, when it comes to online store solutions, few companies have gained more market share than Shopify in the last 6 years, and none of them have grown as fast:

2. …But Shopify could be losing ground to WooCommerce

Across all the ecommerce websites on the internet, Shopify is still more popular than WooCommerce. Compare Shopify vs WooCommerce here.

But looking at the top 1M websites, it seems that WooCommerce surpasses Shopify’s market share, having built 28% of online stores, vs 19%.

Could it mean an increasing number of high-quality websites are built with WooCommerce?

Hard to tell yet. But we should also point out that the aforementioned Shopify Plus also has its own market share there. It’s a small 0.33% within the top 1M sites, so it still doesn’t help tip the scales in Shopify’s favor for these stats. Find more information about WooCommerce market share.

3. How many Shopify stores are there?

As of December 2022, more than 1.91 million ecommerce sites are built with Shopify, according to BuiltWith.com.

How we got this number: currently there are 4.14 million Shopify live websites. This number also includes 2.23 million “dormant” Shopify websites, which were abandoned or haven’t been launched yet. Subtracting all dormant Shopify sites from the total number is as close as we can get to the real number of live Shopify stores that are using paid plans.

In total, there’s an estimated 6.24 million stores that have been created over the course of Shopify’s existence (Shopify was founded in 2006).

According to official data from Shopify’s financial filings, there are now more than 2 million active Shopify merchants.

Shopify’s number of merchants has grown more than tenfold since 2015 as this table shows:

It’s important to note, that in comparison to other website builders like Wix or WordPress, Shopify doesn’t offer a free plan. By definition, all of Shopify’s subscribers are paid users.

Each of these Shopify stores uses one of the three main plans (Basic, Shopify, and Advanced), as the enterprise-level plan Shopify Plus is counted separately in BuiltWith. Altogether this represents a fair amount of the Internet as a whole, especially within the Top 100k website segment:

4. What are Shopify’s most successful countries and regions?

While Shopify is active in 175 countries around the world, their biggest market is North America, with a share of revenue of 71%. EMEA comes second with 17%, APAC is third with 10% and finally Latin America only is responsible for 1% of Shopify’s revenue: 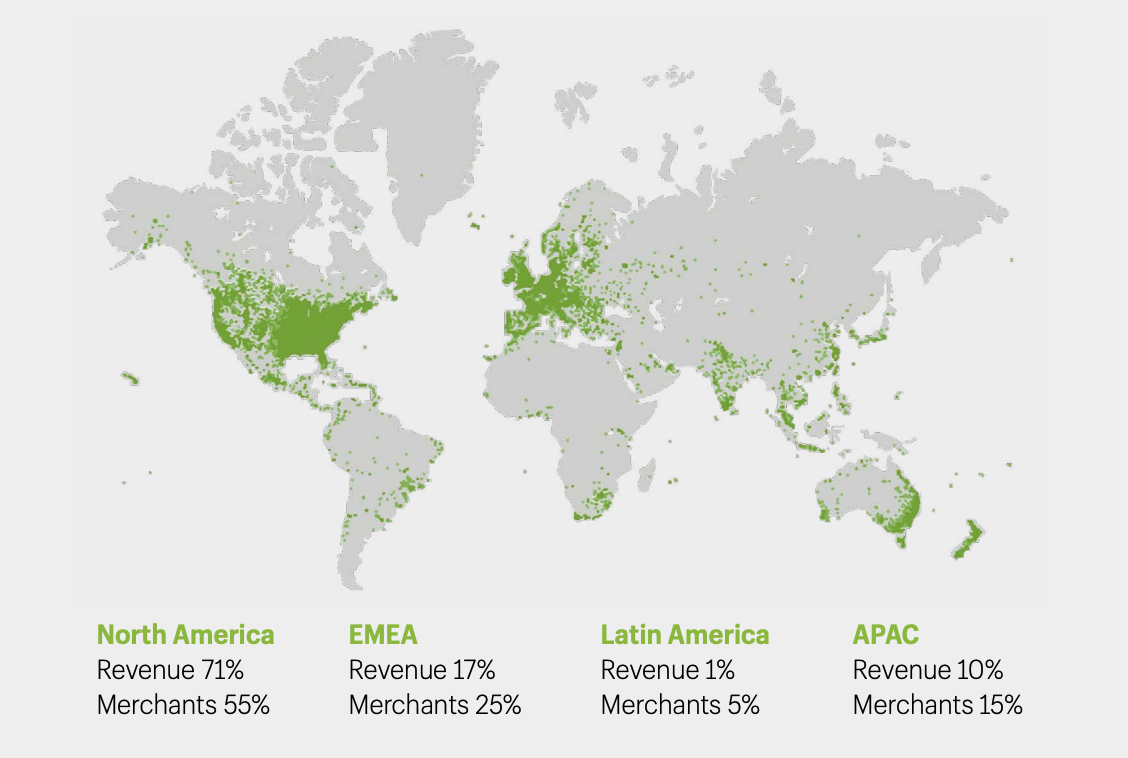 Historically, Shopify has been highly focused on English-speaking countries, and used to only support USD as a currency. This explains why the top 4 countries where Shopify is most popular are all English-speaking, according to BuiltWith.com:

According to BuiltWith, Shopify has a market share of 25% in the United States for websites using ecommerce technologies.

Their largest markets after the above are now Germany, Brazil and France.

5. It’s the most searched ecommerce solution

Google Trends can be a good indicator of how popular a company is, and, we can clearly see how searches related to Shopify are much more common than for other builders.

And looking at Shopify’s popularity worldwide, you can see that the map is green in all English-speaking markets: 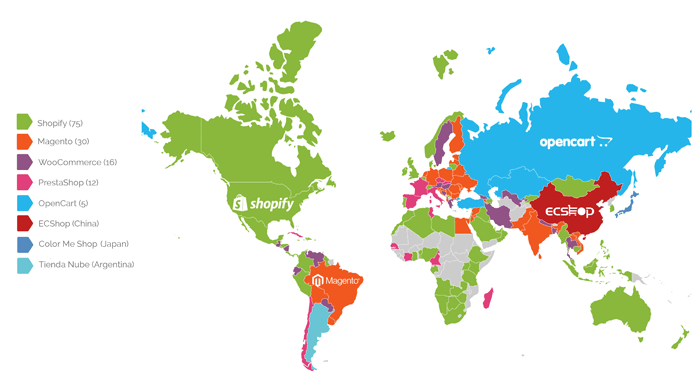 Our research through Ahrefs seems to confirm these findings, where we can look at the worldwide search volume on Google:

It’s worth noting that Shopify is publicly traded, so a lot of these searches will be about the business side of things (shares, performance, news) rather than the product itself.

Other Shopify competitors are smaller projects, ecommerce-wise, like Volusion, Wix or Squarespace. BigCommerce is probably the most natural alternative (especially in terms of price), but it’s far from achieving Shopify’s success in terms of users.

Pretty much all website builders are trying to nab some of Shopify’s market share by offering their own ecommerce solutions. But it remains to be seen how successful they will be.

Each one has something to offer though. So if you’re considering Shopify for your own project, make sure you check how it fares in our tests to determine the best ecommerce website builder before you make a decision!

Speaking of shares, they started trading at $28 when the company went public in 2015. This was already 60% higher than the original $17 offering price at Shopify’s IPO.

In November 2021, shares were trading at a massive $1,500 after hitting the low of $346 during the Coronavirus crisis. Obviously COVID-19 propelled Shopify’s business as nothing has ever before.

As bricks and mortar sales collapsed during the pandemic and consumers moved online, Shopify was perfectly placed to capitalize and they were rewarded with a 96% increase in revenue in Q3 of 2020.

Worldwide, over $5 billion worth of sales were generated through Shopify stores during the Black Friday / Cyber Monday period alone in 2020, a year on year increase of 76%.

Unfortunately for stockholders, Shopify’s shares crashed back to pre-pandemic levels and were trading at $340 as of May 2022. This is a decline many tech companies are currently experiencing, so it’s not exclusive to Shopify.

7. It’s now worth more than eBay

Shopify is now worth $40B, which in 2019 saw them surge past eBay ($23B). In 2020, the Canadian company also beat eBay in terms of sales volume, making them the second-biggest ecommerce platform in the world behind Amazon.

The eCommerce platform of the future?

Shopify’s growth shows no signs of slowing down. The company is becoming more profitable, popular, and more complete (in terms of features) with each passing year.

But where does it go from here? Can it conquer Asian markets like China or Japan where small business ecommerce stores aren’t quite as popular? And can it make its mark in Europe, where open-source systems are preferred?

One thing is for sure – seeing how fast the business is moving, it will be fascinating to keep track of these statistics in the years to come.

If you’re interested in using Shopify for your own projects, check out our Shopify review, our Shopify SEO review, and our round-up of the best free Shopify themes!

And please let us know what you think about Shopify’s market share in the comments below!

Hi, I'm Inka! I started using website builders and content management systems over 10 years ago, when I managed websites for clients in my first marketing role. Since then, I've worked on hundreds of web and digital projects. Now, at Tooltester, I'm happy to be able to use my experience to help users like you find the right website builder for your needs.